On a competitive level, UFC 200 delivered as well as it could have.  But, the lack of superstars left a special aura missing from MMA’s seminal event.

I wanted some intrigue.  Some drama.  A game changing moment that would be talked about well into next few months.

So following the main event of UFC 200, and three full days of excellent MMA overall, I struggled to describe why I felt underwhelmed at its conclusion.

It’s then that I realized that special drama that I was looking for didn’t happen at UFC 200, it occurred outside the cage.

UFC 200 on paper had everything except one thing: well prepared superstars.

When plans for the event began last year, the prediction was that the UFC super event had to be headlined by the biggest stars in the sport.

Following her phenomenal 2015, how could Ronda Rousey not make an appearance?  Holly Holm took some of the shine off the transcendent former champion with a second round knockout victory in November.  But, the timing made sense for the July event.

Rousey would return at UFC 200 for the rematch against the woman who ended her spectacular run.

Only, she didn’t.  Rousey has been more absent in 2016 than since she first burst onto the scene in 2011.  A long layoff for film commitments has pegged her to return late this year or early next year.

There is a growing sentiment that Rousey may be afraid to return to the cage.  After all, a hastily made comedy Do Nothing Bitches with Tina Fey seems hardly reason to walk away from being one of sports biggest superstars.

UFC 200 also figured to pair Rousey with 2015’s other breakout athlete, “The Notorious” Conor McGregor.  A card featuring both competing on the same night seemed like a no-brainer for the seminal card.

Instead, McGregor’s detour to welterweight against Nate Diaz led to a twist few could imagine.  The Irishman was signed and announced for UFC 200, but left the MMA community shocked when a refusal to appear in Vegas for promotional commitments removed him from the event.

What were the odds?  The sports biggest talker and sound-byte machine didn’t want to do the kind of press that made him a star in the first place.  The reason: it would be too distracting at a little less than two months out from the fight.

In an even more shocking twist, McGregor was the fighter in Vegas over the weekend when the star penciled in to headline the card was absent.

After more than a year away, Jon Jones returned to action in May to win the interim title and set-up a second grudge match against undisputed champion Daniel Cormier.

There were four titles on the line over the course of the week.  But the biggest storyline from the event was Jones being pulled from the card three days before it was set to take place.

Currently, he is the best pound-for-pound fighter in the world.  By the time he returns, he figures to be unlikely to be the same.  His situation is different from others such as bantamweight champion Dominick Cruz.  Cruz was injured over the course of training.

The causes for Jones’ absence comes from his own actions.  His career as of late has now been defined by his personal failings rather than his mesmerizing talent.

What was UFC 200 left with?  The most stacked card in history.

From a competitive stand-point, the fights delivered as well as could be expected.

But the lack of stars led to a lack of a special aura of past events.

José Aldo put on one of the best performances of his career in decisioning Frankie Edgar.  But, the match-up the fans truly wanted to see was the competition between himself and the onlooking Conor McGregor.

Anderson Silva, the best fighter of all time, stepped in to face Cormier on two days notice to save the event.

The truth of the matter, having gall bladder surgery and without any real training, the most Silva could muster were crowd pleasing flying knees and switch kicks that were quickly stifled by the size and grappling of Cormier.

Silva’s most ardent supporters hoped for a dramatic victory by “The Spider” early in the fight before tiring, but in reality he was never able to mount significant offense in fifteen minutes. 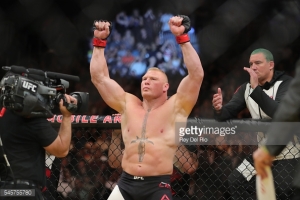 The biggest star competing at UFC 200 was Brock Lesnar.  After being away from the sport since 2011, the one thing that stuck was that the mystique of the wrestler was still strong enough to draw viewers.

Competitively, there were few changes that Lesnar displayed that weren’t seen when he muscled his way through his first tenure in the UFC.

Mark Hunt, for all his punching power, was severely undersized and was going to have to get extremely close to Lesnar to land one of his signature bombs.

The factor that became most apparent was that Lesnar’s mass was enough to overpower Hunt’s defense on the ground.  The size mismatched allowed Lesnar to smother Hunt and deliver brutal damage from the top position.

Throughout his first run in the UFC, Lesnar was successful because of the physical mismatch he was able to exploit against fighters like Randy Couture, Frank Mir and Heath Herring.  When facing opponents who he could not steamroll with his size, Lesnar’s skill-set offered virtually no threat.

In fights with Cain Velasquez, Alistair Overeem, and Shane Carwin for one round, Lesnar was dominated easily and often cowered away from strikes.

The biggest shock of the night was that Lesnar not only survived one round on the feet in the second, but that he also remained healthy enough to fulfill his SummerSlam commitment at the WWE.

UFC 200 brought plenty of storylines to talk about.  It’s most glaring blemish: the biggest stories occurred outside the cage.