Ahead of the historic UFC 205 card in New York on Saturday, I spoke with the talented host of the UFC Minute: Lisa Foiles!  We spoke about her current job with the UFC, her YouTube videos, and more!

Gabriel Gonzalez: Hi Lisa, thank you for taking the time to speak with us at Ganzo13.  Before anything, congratulations on the birth of your daughter!  How are you both doing?

Lisa Foiles: Thank you, and we are doing awesome!! All my friends were so busy warning me of all the tough things about having a newborn, no one told me how fun it would be! It’s a blast!
GG: You obviously have become very familiar to MMA fans as the host of the UFC Minute, what was the audition process like?
LF: I auditioned at the UFC headquarters in their studio. It was so dark, I didn’t recognize who was watching me (no clue if Dana was there!) but there were about 25 people behind the camera! I read a sample script for them and nailed it… except I totally pronounced Donald Cerrone’s last name wrong, and asked them if I could start again, haha! That was back when I was an MMA noobie. I’m way more knowledgeable now, and Cowboy is one of my favorite fighters.

GG: You obviously provide a new “minute” of news Monday through Friday, what’s the shooting schedule like for your segments each week?
LF: I receive the news from the UFC each morning, and I film/produce the episode in my at-home studio. If there is urgent breaking news, I film those as quickly as I can! It’s a great show, and I LOVE doing it.
GG: What has the response been like from MMA fans to your segments?  Do you have that surprised reaction from fans that the girl from All That is now grown up talking UFC every day?
LF: You know, I was really surprised how awesome MMA fans were when I first started. They accepted me into the community with open arms! I think it helps that I’m a genuine fight fan. I’m not just reading words on a page, I actually care about and know what I’m saying.
GG: Because you’re not quite locked into a reporter/correspondent role such as Megan Olivi, are you able to be biased when watching events and cheering for your favorite fighters?  Who in particular are you a fan of?
LF: Oh, I totally cheer for my favorites, haha! I am a HUUUGE Stipe Miocic fan. That guy is the man. I fell in love with him while watching UFC Embedded. I also love Holly Holm, Miesha Tate, Cowboy, Wonderboy, and the almighty Conor McGregor. Oh, and Forrest Griffin, too. I produce his Rankings Report show every Monday so he’d probably be upset if I didn’t add him to the list.
GG: While we see you on the UFC Minute each week, you’ve also expanded to have an impressive following on YouTube.  How do you come up with the topics you talk about in your videos?
LF: I literally come up with my YouTube videos the day of. I wake up on Tuesday and say, “Hm. I should do a video for tomorrow.” And then figure it out while getting ready, ha! It’s better that way – more spontaneous! My channel is meant to be 100% me and my weird life. My upload schedule is every Wednesday… OR whenever I feel like it. 🙂
GG: With the wide variety of videos, about your dog Riley and cat Kevin, to talking about your time on All That, do you have a favorite video that you’ve done or is it impossible to choose?  Which of them stand out to you and why?
LF: I really like the Drunk Stretching video I did… I’m sure my family is real proud of that one. 😉 For some reason, my ’90s Arts & Crafts video has the most views of any of my videos, which is weird because I am not crafty AT ALL. Pinterest is foreign to me.
GG: Following your videos, fans really seem to grow with you on your journey, such as when you got your dog Riley and now celebrating her first birthday. Do you find yourself with a lot of fans from your Nickelodeon days who have continued following you or do you feel it’s a whole new generation of fans you’re connecting to?
LF: There are a handful of Internet “friends” I’ve known since my first season on All That – over ten years ago! I’ve never met most of them, but I feel like I know them since we’ve chatted for so many years. It’s so cool to have people like that who have cared about my life/success for so long. I hope I never disappoint them. 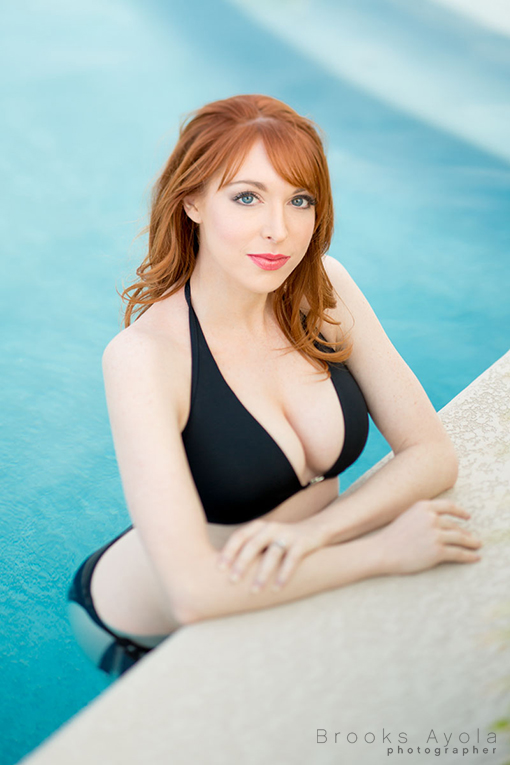 GG: Finally, what projects can fans look forward to seeing you be a part of to close out the year and going into 2017?
LF: The UFC Minute is still going strong, so keep watching that every day! 🙂 You can judge my daily outfits/fashion sense. (Or lack of.) I also voice the YouTube series “Desk of Death Battle” as Jocelyn. Comic and video game nerds like me will love it. I also have a very cool announcement that I’ll hopefully be making in one or two months…
GG: Thank you for taking the time to speak with us Lisa! Where can fans follow you on social media to keep up with everything you have going on?